In the agricultural research for development sphere, gender experts emphasize that gender issues are a very compelling way of explaining the outcomes of rural development programs. Studies have also shown that when women farmers are meaningfully included in agricultural development opportunities, not only do farms become more productive but also adoption of new technologies increases. A group of women from Kakamega County in Kenya has clearly demonstrated how true this finding and others holds, such as documented in the book ‘Women, Livestock Ownership and Markets’ which notes that different livestock and livestock products have different importance for women. 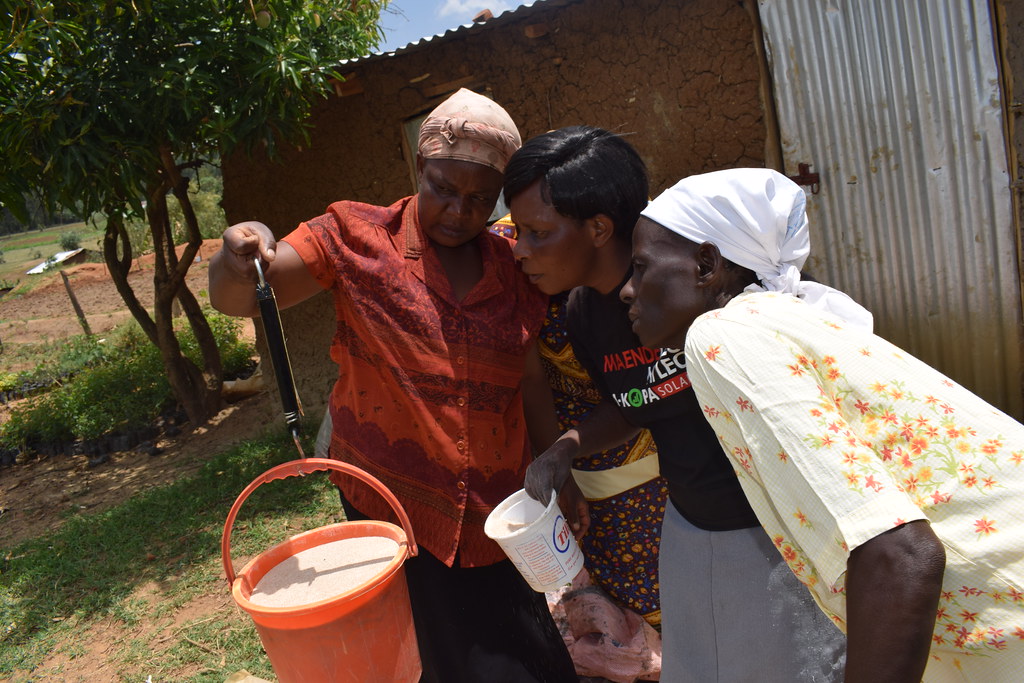 Some members of a women group in Kakamega County in Kenya weighing ingredients for use in preparing home-made dairy meal (photo credit: ILRI /Dorine Odongo)

As the world was celebrating this year’s International Women’s Day themed ‘Be bold for change’, we were in western Kenya for field visits to engage smallholder dairy farmers who had earlier received training on dairy production. We met Flora Ovamba and Catherine Ijuza, members of Beluso women group in Lumakanda village in Kakamega, who are a true definition of bold women in rural settings exploring new ways to change their livelihoods.

The two are among the 150 farmers (so far) trained over the past one year by the Mazingira Centre of the International Livestock Research Institute (ILRI) funded under the GIZ program: Green Innovations Centre for the Agriculture and Food Sector. The training was based on month-long practical courses and supplemented by this smallholder dairy farmer training manual.

Upon completion of the training course, which encompasses several components and modules in October 2016, Ovamba and Ijuza (who keep two and three dairy cattle of mixed breeds, respectively), were very enthusiastic and keen to implement the lessons they picked from the training. For them, the component on feeds and feed management stood out and they immediately contributed some funds to jointly prepare home-made dairy meal for their cattle. They discovered that this saved them a significant amount of money in comparison to purchase of the commercial dairy meal.

‘This home-made dairy meal that we prepare is also highly nutritious because it contains more than nine nutrients, compared to the commercial one which is said to contain just about three ingredients,’ said Flora

The two women did not stop there; they were excited to share this new discovery with their friends.  They decided to offer the training on preparation of home-made dairy meal to the rest of their group members, whom embraced the technology positively not only because they made significant savings on cost of purchasing dairy feeds, but they also increased milk production more than two-fold. Ijuza mentioned that while her cow was giving about 2–3 litres of milk per day, she now gets more than 6 litres of milk from the same cow per day. Ovamba’s cow of local breed was previously giving less than 1 litre of milk, but is now giving more than 2 litres per day. 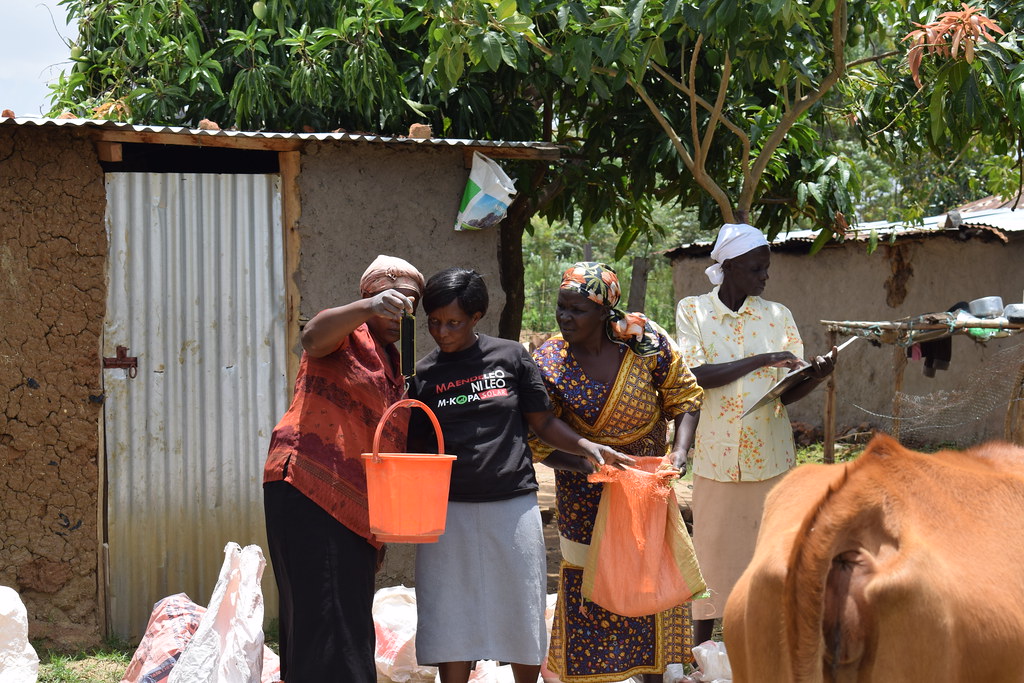 Soon, word had widely spread across the village, highlighting the wonder feed that Beluso Women Group was making. They started receiving requests from other farmers either to offer the same training, or to prepare the feed at a fee.

An unlikely unassuming source of income

Together with the rest of their group members, they saw an opportunity to generate income from this unassuming ‘tool’ — knowledge on preparing home-made dairy meal. The feed is popular with their fellow farmers because of its relatively low-cost, and better nutritional value. In addition, farmers make savings on transport costs if they were to buy the commercial feeds from the nearest town, located approximately 40 km away. 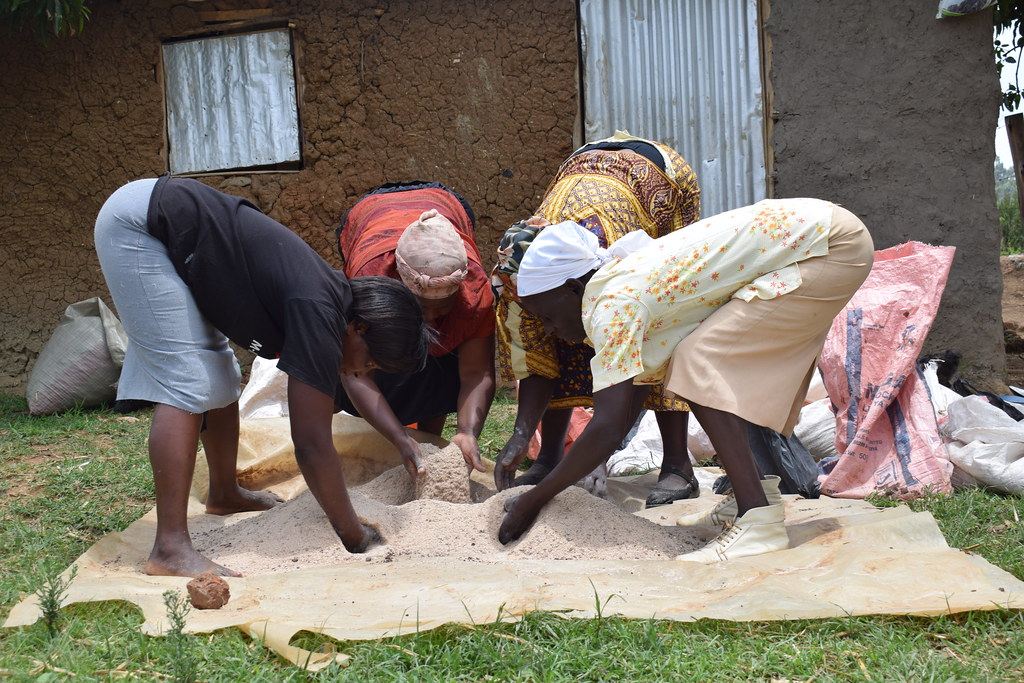 The Beluso Women Group contributed some funds from their group kitty and purchased ingredients for preparation of the feeds which they now do regularly to meet the increased demand from the village farmers. They are now keen on establishing ways of accessing additional funds either through credit facilities or grants to establish a commercial enterprise on production and sale of dairy feeds.

As we left Flora Ovamba’s home that evening, we were extremely impressed at how unassuming a livelihood source, the smallholder farmer’s training had offered the women in western Kenya. While the training course sought to improve farmers’ knowledge on basic production techniques to ultimately increase their production and improve their livelihoods, we did not anticipate that one small component of the training would be so instrumental in transforming livelihoods.

The two women and the other group members now have an additional source of income besides dairy production, which they are keen to build further for increased returns. Indeed, when women farmers are meaningfully included in agricultural development opportunities, not only do farms become more productive but adoption of new technologies increases!