While immense emphasis has been placed on livestock manure management through options such as biogas production, little has been done to investigate the environmental and economic potentials of bioslurry – a by-product from biogas production. The Mazingira Centre of the International Livestock Research Institute (ILRI) has now entered into a research partnership with the Kenya Biogas Program (KBP) of Hivos to assess the environmental, agronomic and productivity effects of bioslurry as organic fertilizer for crops in smallholder systems.

The Kenya Biogas Program targets smallholder crop and livestock producers across Kenya to promote uptake of biogas production using small-scale biodigesters.  The program has reached more than 18,000 households so far and activities spread across various parts of Kenya since 2009. 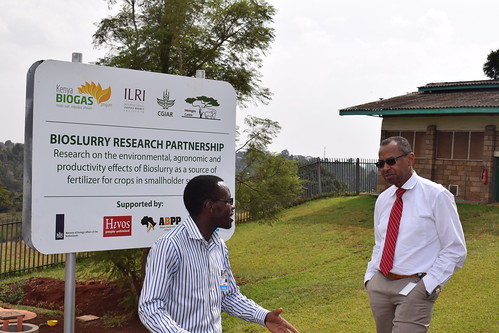 Speaking at ILRI where the research partnership was commissioned last week, Kevin Kinyangi, the Program Manager for the KBP noted that while they have been promoting biogas production as a form of manure management and use of bioslurry as fertilizer in smallholder systems, they do not have the exact evidence – facts and figures – on the real value of bioslurry both as fertilizer and potential environmental benefits.

“This research partnership is important to us because we want to speak with authority and confidence about our contribution in climate change mitigation, because bio-digesters are considered as one of the Nationally Appropriate Mitigation Action initiatives. We want to be sure that we are not digging up one hole to fill up another, hence the reason we are keen on the research-based evidence”. said Kinyangi

Lutz Merbold, heading ILRI’s Mazingira Centre, notes that they are keen on this research partnership because they want to quantify the greenhouse gas emissions from bioslurry storage and after field application and compare these numbers to estimates given for other manure management strategies as provided by Intergovernmental Panel on Climate Change (IPCC). The Mazingira team further aims to compare the nutritional value of common fodder species treated with and without bioslurry. Preliminary results are expected at the end of 2017. 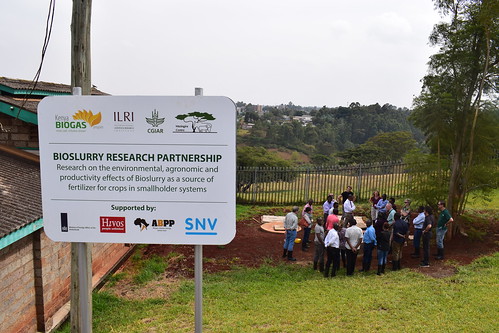 The project is funded by the Dutch government through the Netherlands Development Organisation (SNV) which provided two 6m3 biodigesters as experimental platform to ILRI’s Mazingira Centre. Further support to carry out the environmental research is given by the CGIAR Research Program on Climate Change, Agriculture and Food Security (CCAFS).