The socio-economic conditions of Africa have continued to undergo massive and rapid transformation due to factors such as urbanization and population growth. The adverse effects of climate change on the continent have also intensified, necessitating the design of context-specific strategies to ensure food security and environmental sustainability. In this regard, it has become increasingly important to quantify Africa’s contribution to greenhouse gas (GHG) emissions to support the design of relevant mitigation and adaptation strategies. A lack of representative and systematic information on GHG emissions is hampering efforts to evaluate the contribution, and simultaneously, the impacts of climate change on agriculture across the continent. Compared to observation systems for greenhouse gas and other emissions in other continents, African networks have much less capacity.

The establishment of environmental Research Infrastructures (RI) and observational systems in Africa that can generate knowledge to inform climate change mitigation strategies, is therefore crucial. The ‘Supporting EU-African Cooperation on Research Infrastructures for Food Security and Greenhouse Gas Observations (SEACRIFOG)’ project is promoting the European Union-Africa cooperation dialogue at the policy, science and society levels. Focusing on land use change, climate-smart agriculture, the carbon cycle and GHG observations, the project seeks to support mitigation and adaptation to climate change and to design a GHG observation research infrastructure (RI) for Africa.

The SEACRIFOG project recently published the paper, ‘Towards a feasible and representative pan-African research infrastructure network for GHG observations’, which details the project’s approach and initial results.

The first stage of this project included the identification and engagement of key stakeholders, the definition of the conceptual monitoring framework and an assessment of existing infrastructural capacity. Stakeholders identified represented academia, existing research infrastructures, non-governmental organizations, international organizations, government institutions, farmers and the private sector. Feedback from these stakeholders was obtained through three Stakeholder Consultation Workshops held in Kenya, Ghana and Zambia between 2017 and 2018.

The main concerns identified were ‘data quality and accessibility, the need for capacity building and networking among scientists, and adaptation to climate change, which was confirmed to be a priority for Africa’. This feedback also facilitated the selection of a set of ‘essential variables’ that need to be measured in a future environmental RI. An inventory of 47 existing and planned networks across the continent allowed for an assessment of the current RIs needs and gaps in the continent.

‘Overall, the development of a harmonized and standardized pan-African research infrastructure will address the continent’s primary societal and scientific challenges through the creation of synergies among existing and planned networks at regional, continental and global scales.’ 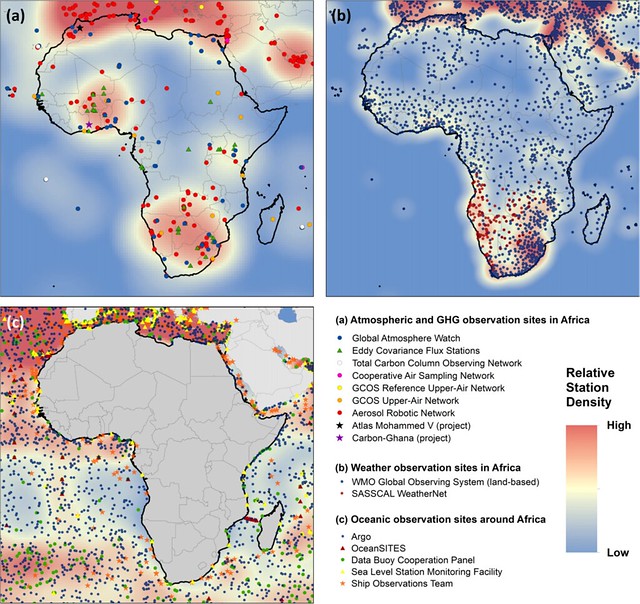 A visual representation of observational stations for atmospheric and GHG observations in Africa, from the SEACRIFOG paper (station data sourced from the World Meteorological Observation’s OSCAR tool).

A press release issued by Physics World, an environmental news website of the UK’s Institute of Physics also highlights the initial results of the project reiterating the need to establish a pan-African RI for GHG observations.

According to the release, ‘the research infrastructure should include an extensive network of greenhouse-gas monitoring stations; a common goal to study the data from those stations and develop strategies for climate-change mitigation and adaptation; people to run the infrastructure; an international network of partners from different sectors; and long-term political and financial stability.’ ‘It should also have a name, the release says. ‘Europe’s greenhouse-gas research infrastructure, for example, is known as the Integrated Carbon Observation System (ICOS).’

The SEACRIFOG project is being implemented by several partners including the Mazingira Centre at the International Livestock Research Institute (ILRI). It is envisioned that this project will create long-term and sustainable cooperation among African and European environmental research infrastructures (RI’s) and provide knowledge about the environment, land use and other natural resources to guide policy decisions.

The SEACRIFOG project is funded by the European Commission under the Horizon 2020 program.